WAYNESFIELD, Ohio (5/24/18) – The name Bob Hampshire isn’t a name that comes without years of stories and race memories. So, following an illustrious career, Hampshire, former driver and now Hall of Fame car owner and engine builder, has found his name as the headline for what is set to be an all star studded night at Waynesfield Raceway Park this Sunday May 27th. Local promoter Shane Helms created this event to honor Hampshire for his years of dedication and commitment to the sport of racing. For their first appearance of the 2018 season, the Arctic Cat All Star Circuit of Champions will make their way onto the 1/3rd mile for what is anticipated to be an action packed night. In addition to the 410 winged sprint cars, the K&L Ready Mix NRA Sprint Invaders will be joining the card for their first of three events at Waynesfield this season. The event will serve as a tune-up for the June 17th visit during the Ohio Sprint Speedweek event featuring both divisions of sprint car racing on one night.

So far this season, the All Star points battle has shaped up to be one of the best in years. The top five drivers contending for points are all within 50 points or less of the current leader Aaron Reutzel. Seasoned veterans like Jac Haudenschild, Chad Kemenah, and Dave Blaney have found themselves atop this list, competing against some of the best up and coming drivers in the country. These drivers with multiple championships under their belt will have extra competition coming into this Sundays race, as NASCAR XFINITY driver and two-time Chili Bowl champion Christopher Bell has committed to racing this event. Bell has also committed to pulling double duty with the NRA 360’s.

As for the K&L Ready Mix NRA Sprint Invaders, the 360 sprint cars will be competing this weekend for extra money on the line, with $3000 going to the winner Sunday night. Additionally, they will be competing on Friday at Limaland Motorsports Park and Saturday at Fremont Speedway. Any driver that can win all three feature events will take home an extra bonus of $2000, with a points system being created for these three events. Those who finish in the top five of the points have a chance to win multiple extra bonuses. Jared Hortsman currently holds only a five point lead over Devon Dobie, with Butch Schroeder, Zane Devault, and Tim Allison rounding out the top five coming into the holiday weekend.

Admittance into this Sundays Memorial Day weekend race will be priced at adults $22, kids aged 11-15 for $11, with everyone under the age of 10 admitted for FREE. Pit access is available to anyone for $35. Pit gates will open at 4pm, general admission at 5pm, with hot laps beginning at 6pm, and racing set to begin at 7pm. 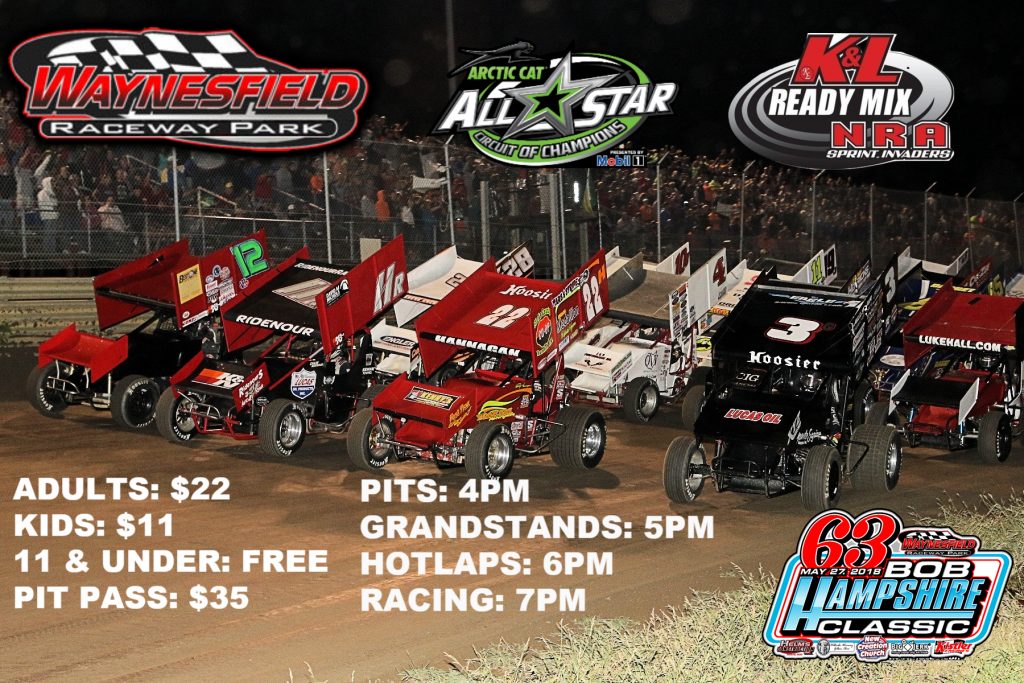 Who will be the first to claim Victory in 2022?

We have waited for the family to get everyone notified first but we are saddened by the passing of our longtime Medical Chief at the track. Mark Miller cared for many drivers over the years. Mark loved racing and more importantly the people in racing. Mark was a Navy veteran and we thank him for his service. Please join us in sending prayers for his family as they walk this journey of the celebration of life. Until we meet again my friend. Photo credit shared from Waynesfield PD ... See MoreSee Less

Many of you may remember Sonny Dickerson in the yellow tow truck for so many years at WRP. It is with regret we share that he has went to the great track upstairs. Such a great guy and always supported the powder puff races at WRP. He will certainly be missed but we also know he has the best seat in the house now. Till we meet again my friend…….. ... See MoreSee Less

We hope everyone enjoyed the show last night as much as our little fan Waylon did! 😀 ... See MoreSee Less