WAYNESFIELD, Ohio (1/15/18) – Officials at Waynesfield Raceway Park in Waynesfield, Ohio have released the full 2018 schedule of events for the famed 1/3rd mile. The schedule, coupled with announcements of increased payouts for drivers, comes as the track takes a new approach to grass roots racing.

The 2018 season will open on April 21st with four divisions of racing. The Non Wing Sprints, Mini Sprints, Tough Trucks, and Compacts will greet fans on opening night.

The month of May will see two traveling series’ stop at WRP. The Modified Lite Stars will make an appearance on May 12th during the first ever “Modified Money” event with $1500 going to the winner of the UMP Modified A-main. The second will be a visit by the NRA Sprint Invaders on May 26th.

The All Star Circuit of Champions will return for their yearly appearance during Ohio Sprint Speedweek on Sunday, June 17th. The NRA Sprint Invaders will also join the program making a doubleheader of winged sprint car racing.

Independence Day weekend will be ushered in with the annual running of the Summer Sprint Sizzler on Tuesday night, July 3rd. The event will feature the FAST 410 and 305 sprint cars, NRA Sprint Invaders, and the Mini Sprints. The NRA Sprint Invaders will be competing for a $4000 to win payday.

The Buckeye Outlaw Sprint Series (BOSS) will make two stops at Waynesfield in 2018. The first will take place on July 7th as they headline the Dick Spencer Memorial. The event will serve as a tune-up for the Jack Hewitt Classic slated for August 4th.

Summer will come to an end with the first ever visit from the Vores Compact Touring Series on August 11th. The event will offer increased payouts for both the UMP Modifieds and the Tough Trucks. Off the track, the event will serve as the yearly backpack giveaway night where young fans in attendance will receive backpacks full of school supplies during driver autograph sessions.

The season will come to a close with back-to-back championship nights on August 25th and September 1st.

The full schedule can be viewed online at www.waynesfieldracewaypark.net. 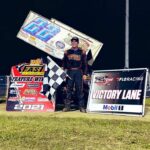 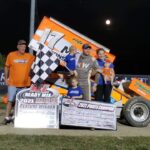 There was a watch found in the parking lot last evening. If you can identify it please PM us and we will get it back to you. ... See MoreSee Less

We don't do wing dances at waynesfield, we do promoter dances! ... See MoreSee Less