WAYNESFIELD, Ohio (9/10/18) – Just as the lights were being shut off for the final time in 2018, the NRA Sprint Invaders were beginning their search for a new home for their championship finale. This opened the door for the creation of the Fall Spectacular at Waynesfield Raceway Park on October 6th, 2018, as NRA promoter Ron Hammons was able to strike a deal with Waynesfield owners Greg and Tami Shobe, and create one final event set to be one of the biggest of the year. Not only will this night feature the 360-winged sprint cars, the traditional 410 non-wing cars and UMP Modifieds will also be joining the card, with big money on the line for all three divisions.

”I’m extremely appreciative of Greg Shobe for working with me to be able to find a new home for our finale”, said Hammons who will be promoting this event. “This event will be one final big blast of 2018, showing the Shobes that Waynesfield is much needed in the racing community, and how exciting and fun promoting an event can be”. “We have multiple family fun activities planned to include a “Haulerween” in which teams will be passing out goodies at their race haulers, and the pits will be open for a set time where kids of all ages can visit”. “Adding the Non-Wing Sprint cars and Modifieds gives the fans a full night of action packed racing.” In addition to the “Haulerween”, there is a costume contest planned with prizes going out to the top four, courtesy of Chuck and Sasha Weigt.

Heading into the championship night for the NRA Sprint Invaders, last season’s champion Jared Hortsman has a commanding lead over Devon Dobie who sits 119 points back. Randy Hannigan is in third 156 points back, Butch Schroeder 325 points back in forth, and Jeff Williams 338 points behind as the top five. The points battles for the Non-Wing Sprint cars and UMP Modifieds ended on September 1st at WRP, so this will be a non-sanctioned, non-points race for both of those classes.

Pit gates will open on October 6th at a special time of 2:00pm with general admission gates at 3:00pm. The “Haulerween” event will begin around 4:00pm as the pit gates will open to all families and children for one half hour. Hot laps will be at 5:00 pm and racing is slated to begin at an early start time of 6:00pm. This is in effort to have an efficiently ran show, not forcing fans to be out late in the possible fall evening temperatures. Tickets for this event will be available for $15 for adults, $10 for ages 11-15, and as always 10 and under are FREE. There will be a special 2 for $25 ticket offer as well. Pit access will be available for just $30. 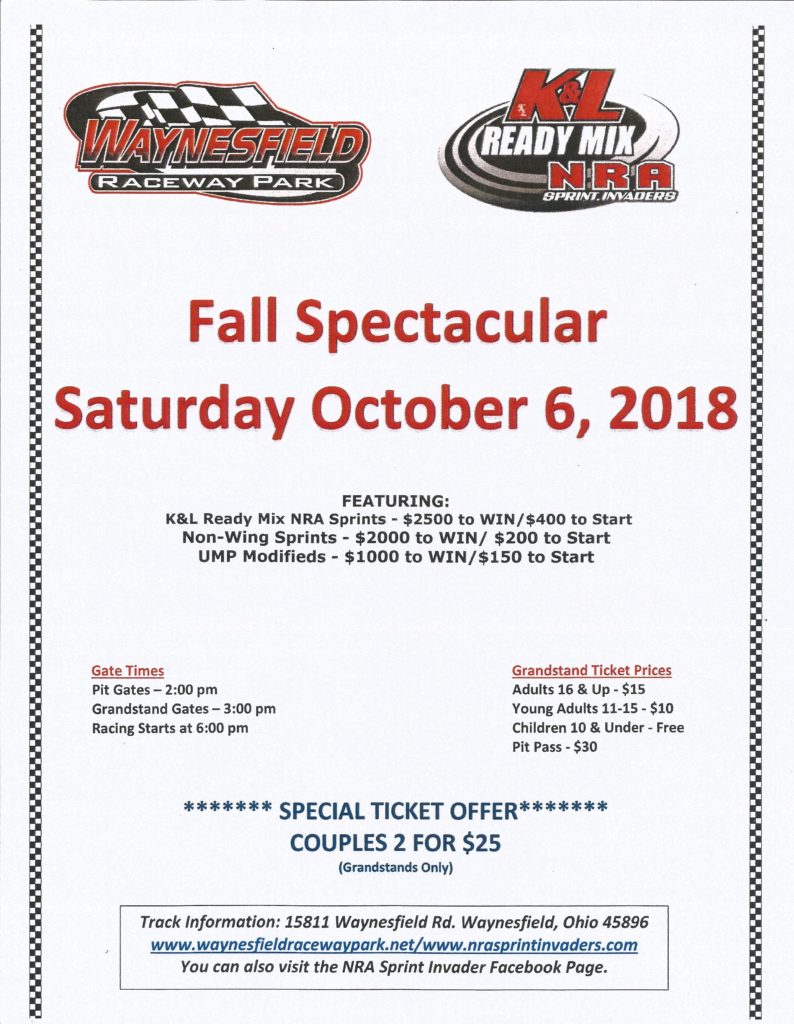 We are live with Jack Hewitt and Shane Helms! ... See MoreSee Less

Well the cats out of the bag. The first official show of the 2020 season has been publicly announced now. WRP returns to the Ohio sprint speed week schedule. We are very excited to release this announcement. There will be plenty more shows announced in the coming weeks. We hope to see you there supporting our event. Thank you and have a merry Christmas 
  www.allstarsprint.com/news/?i=79916
... See MoreSee Less

Thank you to everyone that attended or supported WRP this season with our limited special event schedule. We worked hard and made some great improvements this season and look to continue to build off those improvements next season. We have already started working on a schedule of events for next season. There are no current promises but we have been talking to many different groups. We are excited to see what the future holds for WRP. Once again thank you for all your support and we hope that you have a blessed offseason and please enjoy the upcoming Holidays with your family. Until we meet again in the spring.........🏁🏁🏁🏁🏁 ... See MoreSee Less